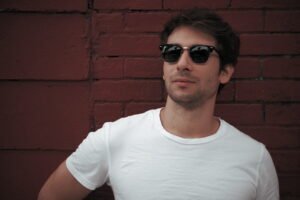 Today I want to talk about mastering minimal house music. That mysterious art that finalizes your tracks and makes them playable.

Well, after many years I learnt that there are two types of mastering that we can consider:

Most of the times we start playing our tracks long before they get released, so long before we pay for a professional mastering. That’s why I think it’s important to learn how to do a home made mastering.

Speaking of this, I’ve seen everything: people mastering their track just by adding a limiter on the master channel; people using tens of different plugins, completely destroying the timbre and dynamics of the track. None of these 2 techniques, of course, is correct (I tried them both, trust me).

So here’s the deal: I’m gonna tell you about the chain I use for mastering minimal house tracks and the (only) 5 plugins it’s made of, why I use them and what’s the logic behind them.

I use the first eq to clean to attenuate the level in those frequency regions where i feel it’s needed. Most of the times that happens in the low frequencies. Be aware that, in the mastering phase, boosts and cuts of only 1 to 3 dBs have a big impact on the overall balance. Don’t exaggerate with that. I personally use Fab-Filter Pro-Q 3 (link here) but if you don’t have it you can use the Ableton stock EQ-Eight. 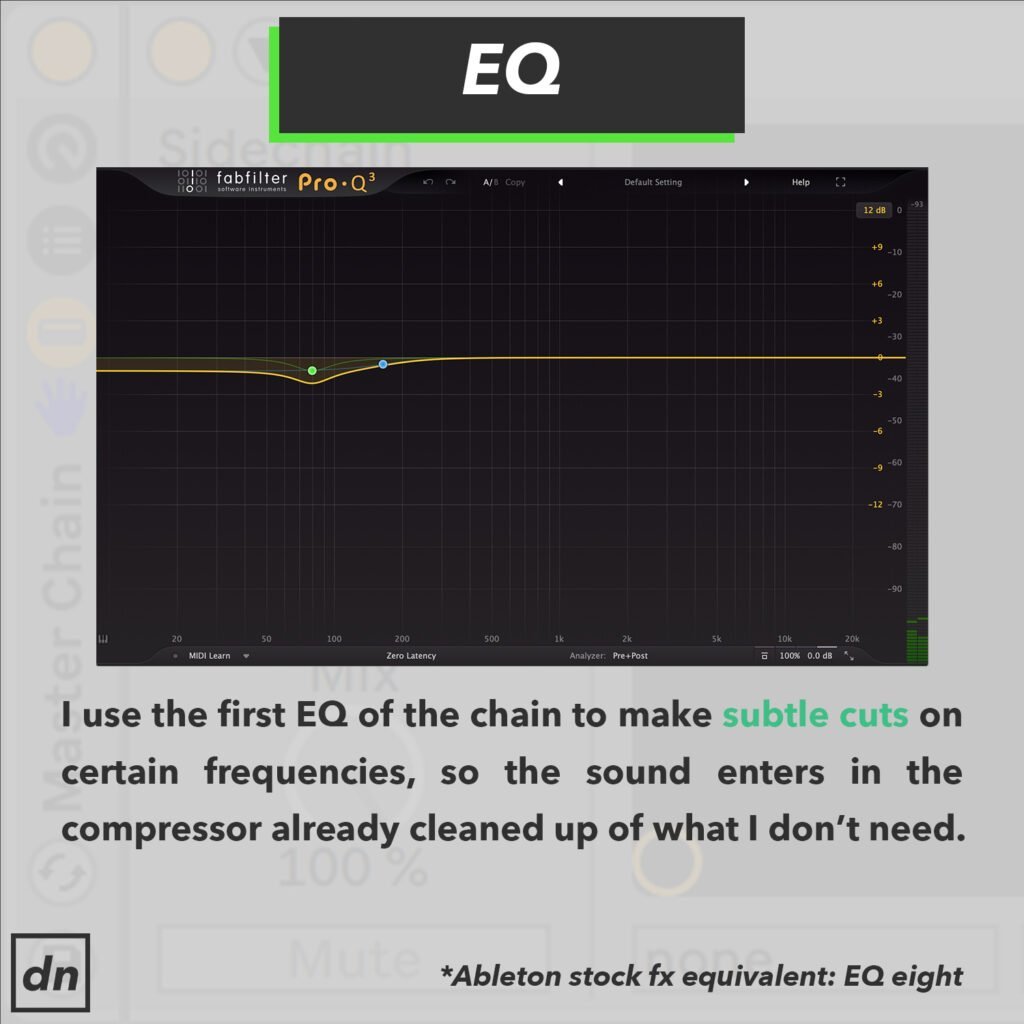 Second plugin in the chain is the compressor. This very important for two reasons:

In order to do that, the attack and release time are the most important parameters. The general rule of thumb is slow attack (like very slow) and fast release. That’s because we want the attack of the kick to pass through and not be compressed and, after the compression kicks in, we want to release it before the following kick hits. The threshold needs to be set in order to have no more than a couple of dBs of gain reduction. Same as for EQ, we don’t want to exaggerate, just small touches! I use FabFilter Pro-C 2 (link here) but the perfect equivalent is Ableton Glue Compressor. 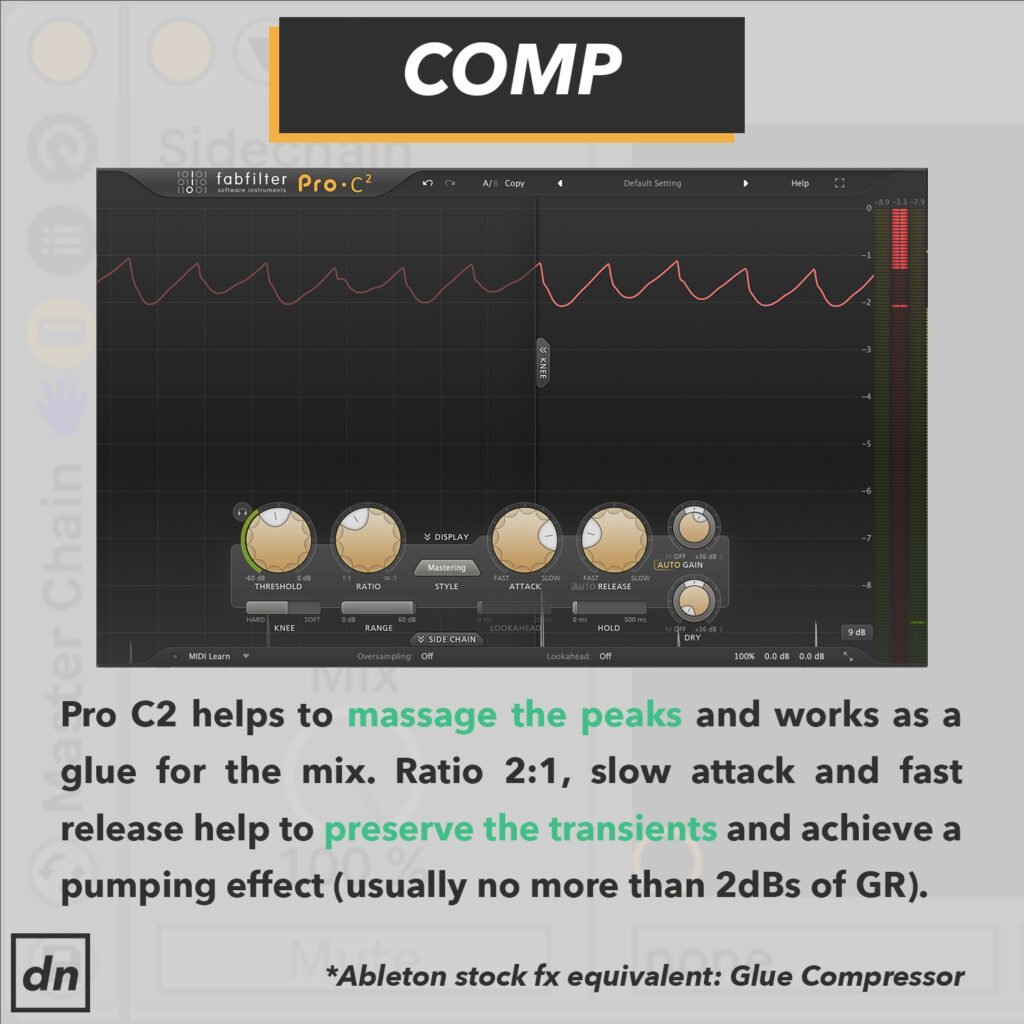 Why another EQ? Well with the first one you made cuts. That was because it makes no sense to have the compressor work on something you cut after. So you need to cut unwanted frequencies before the compressor. Now that we have compressed the mix a bit, we might want to boost some frequencies. Maybe 1 dB around 2K Hz, or maybe a high shelf to brighten the mix a bit. So remeber: first EQ for cuts, second EQ for boosts.

My second EQ is always the Digital V2 (or V3) from Brainworx, which is part of Plugin Alliance (link here). This Eq is specifically made for mastering and it’s very gentle. It also has a MONO Maker knob which I always use to put everything to mono below 150 Hz. Ableton stock effects equivalents are EQ-Eight and Utility, which has the “Bass Mono” button (insert utility first and EQ-Eight after). 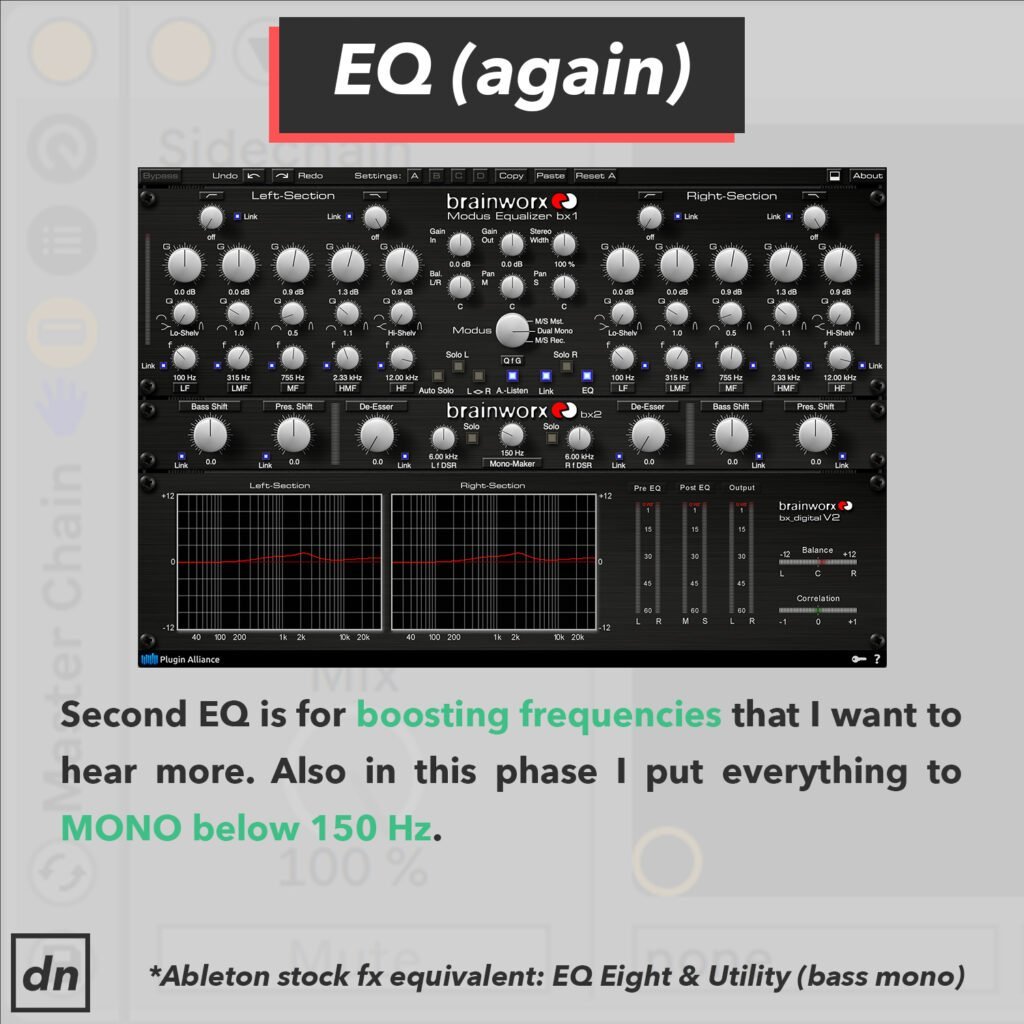 I like to use tape emulation on the final stage of mastering, right before the limiter for 2 main reasons:

This second point is easier to understand if you watch the VU meter in the following picture and see how the needle pass the 0 dB point, while the “clip” led stays off, meaning that we aren’t clipping but just saturating in a good way. I use the Waves Audio Kramer Master Tape for this purpose (link here). Start from the “soft clean compression” and lower the Flux parameter to the minimum level (otherwise this adds lot of saturation on the lows). Then I increase the Record Level, as said earlier, and lower the Playback level (there is a link function between the twos, to make things easier) . It’s hard for me to think of an equivalent Ableton stock plug-in that does this. Saturator is quite different in my opinion. 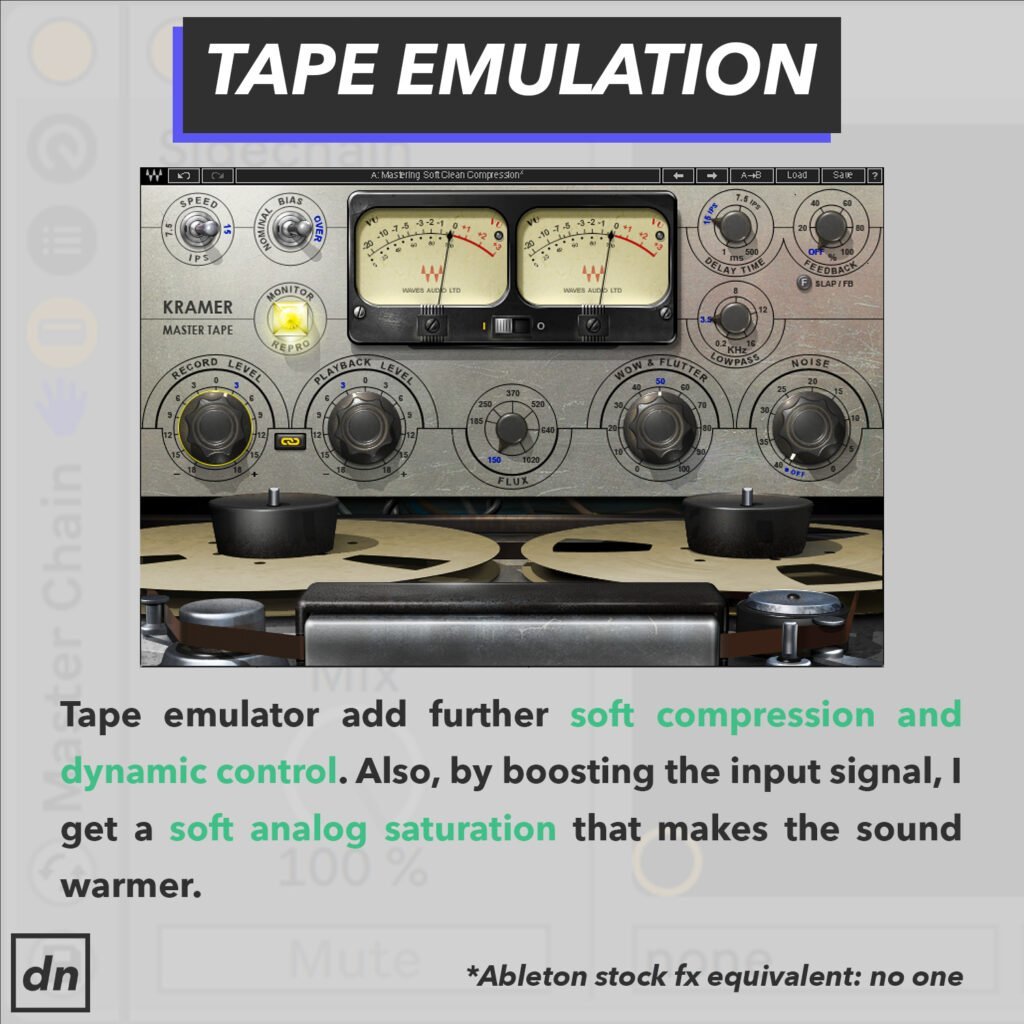 When mastering your minimal house tracks, you want them to sound as loud as the other tracks you play. Limiter is the last piece of the chain that make this happen. How does a limiter work?

It’s a sort of compressor where you have ratio infinity to one. That means that when the level hits the threshold, it can’t pass it. Also, by lowering the threshold, limiter applies, at the same time, a make up gain, that’s why the track gets louder. It gets louder without clipping, cause everything is limited to 0 dB or less, depending on the ceiling value you set.

Now, be aware, that since you are limiting to 0 dB what would normally pass it, you are applying a gain reduction. If the gain reduction is too big, you are squashing your track, and many problems occurs. Try to stay under 4 dBs of gain reduction. Everything you do before the limiter, is important to keep this value low but at the same time being able to reach a good RMS level. Try to reach an RMS level that goes from -7 to – 5 dB, which is more or less the “industry standard”. I use Izotope Ozone 9 Maximizer (link here), but you can use the Ableton Limiter. 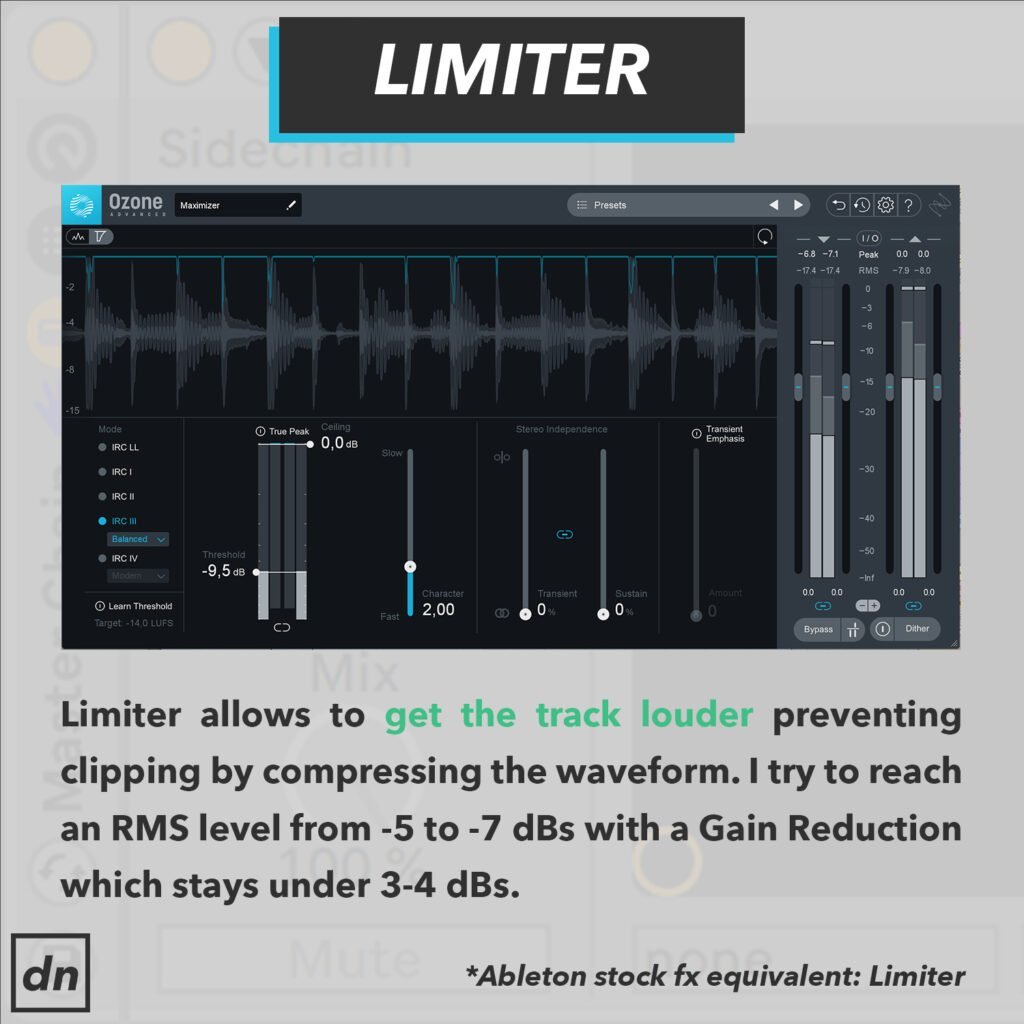 So that’s it guys! This is my point on mastering minimal house tracks. Try to use this chain and let me know your thoughts about it.

A very important thing must be said though. There is no chance of being able to achieve a good master with a bad mix. So before mastering your track, work on the mix the best you can. Test it on different speakers/systems/headphones and be sure it’s OK. It’s very hard to fix mixing errors in the mastering phase.

Also, by making your own master, it’s very likely you will point out mixing mistakes. So you can go back and fix them. Otherwise, if you send your bad mix straight to a mastering engineer, it’s very unlikely, especially for the cheap ones, that he/she will tell you “dude your mix isn’t good try to fix this or that”. Instead, he will do the mastering job, and it won’t be the best.

Have fun in the studio guys! 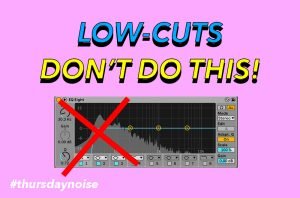 In today’s first post on the channel, I want to share this video I have found on You Tube. It explains very well how EQ changes phase of sounds and... 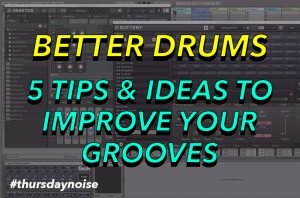 In this post I’ll share 5 tips that will hopefully help you sequencing your minimal house drums and building original grooves. Drums (and bassline) are the element where I spend... 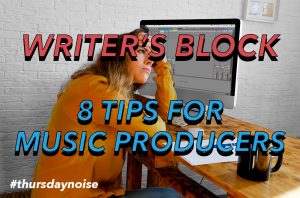 When was the last time you struggled starting a new track? Maybe the latest track you made was a bomb and now nothing seems as good. You are in good... 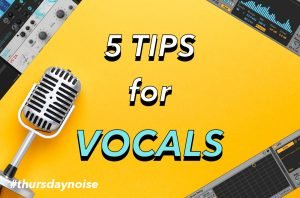 In this post I’ll share my 5 favorite tips on how to use and treat vocals in minimal house. In particular I’ll tell you the following things: where you can... 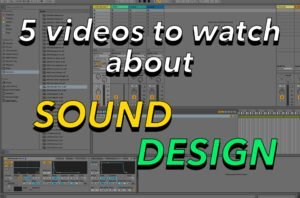 Hello guys, this week I want to share with you 5 You Tube videos that blew my mind at first sight. 5 videos to learn new sound design techniques that... 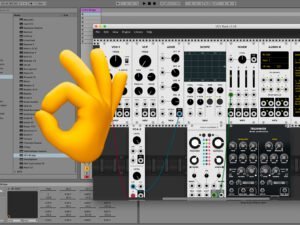 In this post I want to explain how to use VCV Rack with Ableton Live. With “together” I mean being able to sync it, receive MIDI from and send audio...

Why EQ can damage low frequencies

How to use VCV Rack with Ableton Live